This page is for the character Broseph, were you looking for his gender bent version?

Broseph is a 'cool guy' (but also is a jerk) with a shitload of gel in his hair. His color is Cool Gray. He appears to be the 'douchebag' character in the series, dreaming of a life of popularity & wishing he was a tough brute as he only weighs 10 pounds. He might also be manager of one of the stores in Maulmart, License to Drill.

Broseph is a grayish purplish stick figure who wears his hair in a mullet with a shitload of hair gel.

Broseph is very stuck up and obsessed with himself and how cool he is. He is always bragging about how hot or awesome he is or how many chicks he bangs which usually annoys other people. His stories range from being true, to an exaggerated version of the truth, to a complete and total crap lie. He thinks that everything he does is awesome even though it isn't. Other people try to keep on telling him that the stuff he does is not cool, but he always ignores them. Overall, he is a douchebag.

I think we all know what's gonna happen here.

Broseph as a kid in First Day of Cool.

Sixth appearance of Broseph, from Freshman 15

Broseph being shot by Red

Broseph's Female Form, Braseph
Add a photo to this gallery

"You know that I got held back five years?"

"But my muscles didn't."

Remains of the asshole... 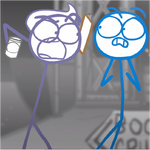 Add a photo to this gallery
Retrieved from "https://dickfigures.fandom.com/wiki/Broseph?oldid=30666"
Community content is available under CC-BY-SA unless otherwise noted.