This article is about the Golden Lotus Ninjas, you may have been looking for the Demon Ninjas

One of many henchmen of Shi Ba, they protect the Chow Mein, until a kung-fu winner appears. There is no hint to their names or if there is a head henchman of the group. They may very well be clones or specially chosen minions to sound and look the same, much like Earl Grey's Butlers.

The only episode where they appear, where they stop Blue from having any Chow Mein and kidnap Pink, but then Red appears and kills them all, including their leader.

Apart from the Demon Ninjas that appeared, the Golden Lotus Ninjas, along with their master, made a cameo in Son-San's Sushi Restaurant when Red and Blue enter the restaurant. 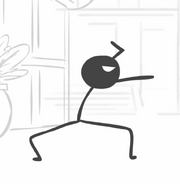 Golden Lotus Ninjas cameos in Dick Figures: The Movie
Add a photo to this gallery
Retrieved from "https://dickfigures.fandom.com/wiki/Golden_Lotus_Ninja?oldid=23699"
Community content is available under CC-BY-SA unless otherwise noted.