Redward, or "Red" is one of the two main protagonists of Dick Figures, besides his friend Blue. He's a fun-loving guy, never seen calm, who almost never takes things seriously and loves parties and women. He wears a backwards red cap and lives with his best friend and roommate: Blue, a calm guy who's the complete opposite of Red. He is mostly amoral except for several occasions.

Red was revealed to be an extra-terrestrial creature in First Day of Cool. In simple terms, Red might be an alien. However, Ed and Zack have stated that Red is not an alien but didn't come from Earth. He may have gained his superhuman powers during his time in space.

His catchphrase's simply "Yeah, right!", but on many occasions, he's been known to yell "'Sup, beeeitch!" or just "'Sup, bitch!". He says "Catchphrase" in Traffic Jams, just before he and Blue slay the Turtle Dragon. He also says "Cuz I'm awesome." In the episodes "A Bee or Something," "First Day of Cool," and "Dick Figures: The Movie."

He's also seen to be a very violent character, as he's seen killing a lot of people at Maulmart in Flame War and also in Lord Tourette's Syndrome, where he smashes through the window of a church and slaughters many innocent people with a katana.

He also makes "the perfect murder" on Broseph in Zombies & Shotguns, cutting him in half with a chainsaw and Red continued killing him on various occasions on different episodes.

Red is a red stick figure just like his name says. He wears a red baseball cap backwards which may possibly give him the ability to fly. Other than his hat, he wears no visible clothing.

Red is a sex-obsessed party maniac who goes around all the time getting drunk, having sex, and swearing at everybody. He is a very loud and annoying person who has an in your face kind of personality. He is also extremely stupid and barely has any knowledge on anything in the world unless it's related to sex, drugs, and other things along those lines. He can get on Blue's nerves sometimes, but he is always there for him and is always a good best friend for him for a reason that Red himself has said more than once in the series: "Cuz I'm awesome!" He also seems to be quite obsessed with shooting games, since in Flame War, he played the Attack of the Trolls game, and when it wasn't as expected, he still enjoyed it. Red is (like the comic character Deadpool) a "sex machine" since he has perfect ways to attract girls, no matter how bad.

Red and Blue are best friends and they always have been ever since they first met each other as little kids in the episode First Day of Cool. Right now, Blue lets Red live in his apartment with him. Red has always been the happy and crazy one in his friendship with Blue while Blue is the more sad and sane one. Red is always having bad ideas and doing stupid things that Blue doesn't approve of but he always gets him dragged into them getting them both deep in trouble that they sometimes get out of but sometimes never do. Red is always very annoying to Blue because on multiple occasions, he has gotten drunk and gone insane and ruined things for Blue such as dates with his girlfriend Pink. The reason why Blue always keeps his friendship with Red and why he always lets his stay in his apartment is because when they first met as mentioned earlier, Red saved his life from Broseph and a bunch of evil fifth graders and Blue promised him that no matter what happens, he will always be his friend. Although it may not seem like it, Red really loves Blue and cares for him, and as lighty implied in the episode Panda Hat, Red may have some sexual attractions for Blue as he told him that he wanted to grow old with him in every way then, he said the same thing to a toilet but then added "except for the gay way" which he didn't say to Blue. However, due to the fact that Red has shown on way more occasions and has made it even more obvious he has sexual attractions for the female gender so he may have only said this because he was drunk.

Pink hates Red because of how annoying, rude, and unsanitary he is. She especially hates him because of how he is always ruining her dates with Blue. Red has shown sexual attractions for her in the episode Brain Switch, when he called her on the phone and started saying sexy things to her and even attempted to go to her house to have sex with her. He showed it again in the episode Snowjob when he was trapped inside of a snowman and he had Pink breathe on him to melt the snow. When she was doing this, Red tricked her into breathing low enough on his body to give him a "blow job" or a "snowjob" as he called it, and once again in Dick Figures: The Movie when Pink passed by him and he said "Hey toots." and Pink replied "Go to Hell, Red" which he replied with "Okay, see you there." Despite this, she seems to show a caring side for him, as shown in Snowjob, where she asks Blue if he's worried about Red.

Stacy is Red's main girlfriend. Although Red showed sexual attraction to other women, he has a great love for Stacy. Red and Stacy first started dating in the episode Trouble Date where they interrupted Pink and Blue's date by breaking into the restaurant they were at, eating their food, and having sex on the table. Apperantly after this, Red and Stacy had not seen each other for a long time until the episode Modern Flame War 3 where Red met up with her again and they had sex. Since then, the two of them have been officially dating and seeing each other very often, and as revealed in Dick Figures: The Movie, they have sex every day. Although they were first seen dating in the episode Trouble Date, there were two future episodes that showed events that happened before then where they have both had some sort of interaction with each other. In the episode First Day of Cool, when Stacy and Red were little kids, Stacy was very happy and surprised when she saw him for the first time as she happily quoted "Who is that?" and then she later came up to him saying "Oh, my God, you are so sexy," as she reached out to him before Pink pulled her away. Red happily responded to Stacy saying this by saying "I know." In the episode Robot Frog, when Stacy was breaking up with Blue, she told him that she had never gotten drunk before and Red overheard her saying this and he responded saying "You are missing out!"

Red hates Fat Ugly Girl because she is fat and ugly and she is always trying to get close to him because she loves him. Whenever Red sees her around he tells her to go home and she sadly walks away. The nicest thing he's ever done to her was in the episode "Y U So Meme?" when he called Fat Ugly Girl to help him with his problem with Jason. He happily told her that she did great and then paid her but then after that he rudely told her to go home and she sadly walked away once again.

However, in Figured Out, after he broke up with Stacy, Red went to express his feelings for the Fat Ugly Girl and asked her if she wanted to be with him, to which she gladly accepted. He then started taking her to the gym, as she got more fit and prettier. Eventually, the two got married and have a girl child.

To see what episodes Red has appeared in, please go to: Red/Appearances

Post some of Red's most famous quotes at: Red/Quotes

Red has killed a truly innumerable amount of people thought the show's run. For this list, a tragedy Red has caused (like destroying a building or sinking a ship) will only count as one single victim unless the casualties are countable. Also, characters who die frequently in the show (like Broseph, Mr. Dingleberry, and Blue) shall only be listed once. This is a full list of Red's body count (at least). It is possible this list will expand in the show's future as Red continues stacking bodies.

Red as a little kid from Camp Anarchy.

Batman: No, The BBQ!

Red in the Deep Space 69 promo

Red, how he originally look, in the un-aired pilot episode

Red as a kid in First Day of Cool

Red with glasses resembling those of Arnold Schwarzenegger as The Terminator in "Terminate-Her!"

"Time to take out the trash."

Bulk Red.
Add a photo to this gallery 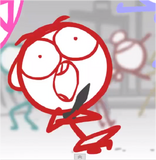 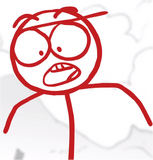 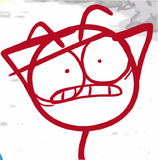 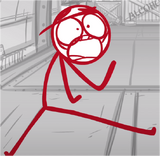 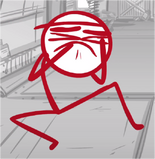 In the ambulance, Red realized the importance of Blue and Pink's relationship.

Red reuniting with Stacy.
Add a photo to this gallery
Retrieved from "https://dickfigures.fandom.com/wiki/Red?oldid=30374"
Community content is available under CC-BY-SA unless otherwise noted.